How To Stop Cat From Vomiting? (Understanding Causes) 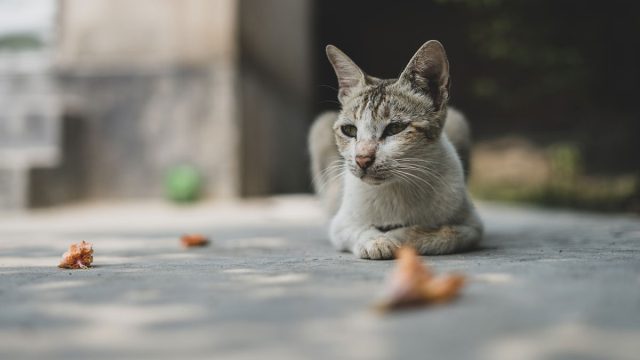 Felines throw up often compared to humans, so knowing how to stop a cat from vomiting is useful for any owner.

Although cats vomit frequently, it is never a good sign. But vomiting doesn’t always need urgent veterinary intervention either.

To find a suitable treatment, you should first understand why cats vomit and evaluate your cat’s overall health state.

A cat that has thrown up once likely doesn’t need to be rushed to a vet. In contrast, a cat that vomits blood and is disoriented and lethargic may be at a high risk of dying.

In most cases, the treatment is limited to changing the cat’s diet and providing it with sufficient hydration, but you should be careful not to miss other alarming symptoms.

Why Do Cats Vomit?

Cats may throw up for various reasons, not necessarily when sick. The most common reasons cats vomit are hairballs and poor dietary habits.

Cats spend a lot of time grooming themselves, and some hair inevitably ends up in the digestive tract.

Hair that doesn’t pass through the digestive tract with food forms a hairball that usually exits with vomit, but sometimes, hairballs get stuck in the intestines.

The hairball issue is prevalent with longhaired cats, but some shorthair cats, particularly those suffering from anxiety causing excessive grooming, may also gag hairballs.

Food allergies are another common reason for a cat throwing up. Typically, occasional vomiting is nothing to worry about, but sometimes, it’s a symptom of chronic medical conditions.

Watch For Other Symptoms

The easiest way to determine the cause of vomiting is by watching for other symptoms. If your cat occasionally vomits because of poor dietary habits or hairballs and shows no other abnormalities, it is most likely healthy.

However, if the vomit is accompanied by diarrhea, constipation, bloating, flatulence, or fever, the cat may have a gastroenteric obstruction, irritable bowel syndrome, food poisoning, or allergy.

In the case of an allergy, the cat may display topical and respiratory symptoms such as skin itchiness, excessive grooming and scratching, rapid breathing, sneezing, and coughing.

The symptoms of intestinal parasite infestation in cats include weight loss despite a regular appetite, dull coat, tarry feces, and overall weakness. Depending on the parasite species, a cat’s vomit may contain blood.

A cat that has ingested a toxin may have excessive salivation, shortness of breath, swollen skin, fever or low body temperature, and rapid heart rate. In severe cases, poisoning may lead to coma and collapse.

The Look of The Vomit

The look of a cat’s vomit can tell you about its cause. Although no one wants to inspect a cat’s vomit, looking at it will help you determine whether it is abnormal.

Cats vomit bile when they have an empty stomach. If the vomit is yellow and contains no pieces of food, the reason may be gastritis. Other signs of gastritis in cats include increased thirst, lethargy, and abdominal pain.

Sometimes, cats throw up clear liquid. The reason for this is usually drinking too much water, which doesn’t seem concerning, but excessive thirst may signal diabetes and kidney diseases.

Blood in a cat’s vomit is never a good sign. It may indicate a parasitic infestation, blood clotting disorder, poisoning, organ rupture, or severe inflammation due to chronic gastritis.

If your cat is vomiting blood, seek urgent veterinary help and don’t try to resolve the issue at home. Worms in a cat’s vomit are another sign of parasitic infection – the most common worm type noticeable in vomit is roundworms.

Brown vomit color is caused by digested blood and is a sign of cancer, intestine ulceration, or obstruction by foreign bodies.

If a cat is vomiting white foam, it likely has intestine inflammation. It often occurs because of hunger, poor dietary habits, or hairballs and shouldn’t raise concerns if it’s occasional, but chronic vomiting with white foam requires veterinary attention.

Often, cat vomit contains indigested food. Such vomit is widespread among cats that eat too much or fast and pregnant felines that feel nauseous shortly after eating.

Diet is an integral element of cat vomit treatment. Regardless of the vomiting cause, your cat should eat a bland diet for several days or weeks, depending on the diagnosis and case severity.

Don’t give your cat food for at least four hours after initial vomiting to let its stomach rest unless the symptom is caused by gastritis. In that case, you can offer your cat food sooner to prevent recurring vomiting.

Ensure that your cat drinks enough water. If it can keep the water down, give it a small serving of bland food, about a quarter of its regular serving size.

The best non-prescription bland fresh diet for cats is plain chicken or turkey. Red meat and seafood are not considered bland.

However, poultry is only suitable for cats that already eat a fresh diet. If your cat eats kibble or wet food, stick with it.

If your cat’s vomiting is a reaction to a new food type or brand, refrain from giving it again and return to its usual food.

Alternatively, switch it to an easily digestible kibble for a while, such as Royal Canin Gastrointestinal High Energy or Hill’s ID.

Note that this is only a general recommendation, and your veterinarian may prescribe a different diet after evaluating all variables.

Consider whether your cat has recently been exposed to potential allergens, such as new foods, medications, or topical products. If you suspect your cat may be vomiting cause of an allergy, reduce exposure to the allergen.

If you think that your cat is allergic to some human food, always clean dishes after dinner and prohibit everyone in the household from giving your cat treats from their plates.

Or, if you think your cat is allergic to a houseplant, move it out of your pet’s reach. The most reliable way of diagnosing food allergies in cats is the elimination diet trial.

The trial should last for at least eight weeks, during which your cat should eat a diet that doesn’t contain proteins it has previously been exposed to.

The diet should be formulated by a professional to ensure that it meets your cat’s dietary needs to avoid worsening the situation.

Provide Your Cat With Enough Water

Vomiting, particularly recurring vomiting, quickly leads to dehydration, so you should ensure that your cat has access to fresh water. If your cat refuses to drink for several hours, try giving it water through a syringe.

In severe cases, cats require intravenous fluid administration to compensate for the fluid loss. Proper hydration is also essential for cats that vomit due to hairballs or digestion issues.

Cats that only eat kibble often suffer from chronic constipation, which can sometimes cause vomiting. Kibble absorbs water in the digestive tract, making it harder for food to pass through the intestines.

By incorporating wet food into your cat’s diet or adding a bit of water into kibble, you can prevent the problem in the future.

For longhaired breeds or kitties with an excessive grooming habit, hydration will help hair to harmlessly pass through the gastroenteric tract because it facilitates proper lubrication.

One of the most common mistakes in treating cat vomiting is withdrawing water. Although water can sometimes trigger recurring vomiting, withdrawal of water quickly causes dehydration.

Don’t switch your cat to a new food type too fast. You should gradually introduce a new food into your cat’s diet, mixing it with old food.

If your cat reacts with vomiting to a new food, temporarily get back to the old food instead of trying something new again immediately.

Don’t withdraw food from your cat for too long. You should withdraw it for several hours, but if throwing up isn’t recurring, there’s no need to keep your cat hungry.

Have Your Cat Checked By a Vet

Learn when a cat vomiting is not normal to know when to seek veterinary help. As a rule of thumb, call your vet if the vomiting is recurring, unusually looking, or your cat displays other symptoms.

Even if your cat’s vomit looks ok and you don’t notice any abnormalities, but the symptom occurs more often than once a week, make a vet appointment.

The success of treatment of some diseases largely depends on timeliness, so don’t postpone a vet visit.

Welcome to Catoxy. I have one passion in life: caring for cats in my cattery. On this website, I share all the tips and tricks that help cats live their best nine lives, as a cattery owner.
Topics
Recent Articles
»