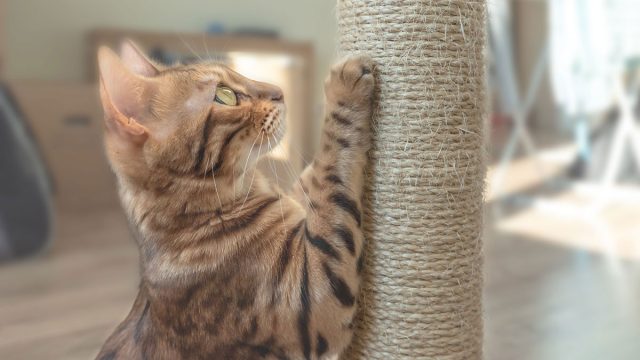 A scratching post serves more purposes than trimming nails, so even felines that lack claws will benefit from having one.

Furthermore, scratching isn’t a fully conscious process in cats. They do it because of an instinct and habit; this natural urge is so strong it can’t be broken.

However, not every scratching post or cat tree is equally suitable for a declawed cat, so you should pick the best scratching post material and construction to appeal to your cat.

One of the primary scratching post purposes, albeit not apparent, is stretching. Cats frequently stretch their backs to maintain their agility and relieve muscle tension.

However, cats cannot stretch their backs like humans, standing on two feet. They need some support, and a scratching post is perfect for this role. Many cats find vertical surfaces more convenient than horizontal ones.

The rough surface of a sisal or carpet scratching post provides a firm grip, preventing a cat’s paws from slipping down. Regardless of whether a cat has claws, it must occasionally relieve muscle tension.

Furthermore, declawing consequences include lameness, back pains, and joint issues because declawed paws step on the ground differently. As a result, declawed cats need to stretch their backs more than regular cats.

Of course, a declawed cat can use a couch or wall to stretch its back. But that’s only one of the reasons declawed cats need scratching posts.

Scratching is instinctive in cats – felines in the wild scratch tree trunks to mark their territory and maintain the health of their claws.

Kittens learn to scratch at about eight weeks old, when they are still tiny and dependent on their mom. Every cat has an innate knowledge of how to scratch and will do it even if it has no claws.

While declawed cats don’t have claws, their instincts remain unchanged. They are still territorial animals that follow the natural urge to claw everything they deem suitable for the purpose.

One may think that a housecat that has never gone outdoors and met other cats won’t have the instinctive urge to mark its territory or that declawed cats eventually learn that they don’t need to trim their nails.

This may be true for some cats, but most will genuinely suffer if they cannot express their instincts and try to scratch furniture instead. Even without scratch marks, the habit can be annoying.

Cats don’t think, “Hey, my claws have become long, I should go scratch that post,” or “My back hurts, maybe I should stretch it.” They simply feel the urge to do it.

A scratching post serves as a playground for felines. Clawing is an excellent exercise, helping cats train their limbs by standing on the back feet and actively moving the front paws.

But a scratching post also makes a perfect jumping and climbing target. Many cat owners don’t like their pets jumping on shelves, TV, or table, which isn’t surprising.

However, one cannot prevent a cat from jumping entirely. Cats are natural-born hunters and love elevations because they provide a good view and allow them to hide from other animals.

If owners suppress a cat’s instinctive desire to climb and jump, the cat may become anxious and despise the owners.

Instead of prohibiting a cat from jumping or climbing on TV, shelves, and counters, owners should provide it with legal elevations.

A scratching post is excellent for this role because it’s tall enough and has a rough surface resembling a tree trunk. The more a scratching post looks like a tree, the better.

Some owners aren’t sure whether their declawed cat will be able to use a tall scratching post or a cat tree. Contrary to a common misconception, declawed cats can climb, although not as effectively as cats with claws.

Climbing is beneficial for feline health because it activates all muscle groups. Furthermore, a lack of claws doesn’t affect a cat’s jumping skills, so it can use a cat tree just like any other cat.

Cat paws have tiny scent glands. When a cat stretches its paws to scratch something, it releases pheromones, leaving its distinct smell on the surface.

Humans cannot sense cat pheromones, but other cats can learn a lot from the smell. They can determine whether a cat is young or old, intact or fixed, healthy or sick.

In the wild, cats mark their territory to communicate with felines from their social group and ward off strangers. Marking tree trunks with pheromones helps cats feel secure because they are territorial animals.

Domestic cats have inherited this instinct from their ancestors. Even cats living alone with no one to threaten their personal space constantly mark the house with their scent, rubbing against surfaces and clawing furniture.

This instinct explains why the couch is a beloved clawing spot among many cats. It isn’t solely sturdy and tall but also serves as a scent repository, collecting the smell of numerous people, including guests.

When a cat senses the smells of the owners and strangers, it wants to make sure that its smell is also a part of the socially significant area in the home.

Cats in multi-pet households tend to use the scratching post more frequently, marking it with their scent to communicate with their peers.

Declawing doesn’t affect pheromone glands or instincts, so declawed cats need to mark their territory just like any other cat.

Furthermore, a scratching post is one of the few items in the house that belongs solely to a cat and is untouched by the owners. Cats need their personal space to maintain their mental well-being.

Declawed cats may become insecure and fearful because they are unable to defend themselves. These changes in behavior may cause elevated territorial instincts and stress-induced scratching.

Studies have shown that scratching helps cats relieve stress, promoting endorphin production in the brain. The process makes cats feel content, improving their mood and having a soothing effect.

For this reason, some cats engage in stress-induced scratching, clawing the scratching post more frequently than usual in an attempt to calm down.

Scratching is a repetitive action, and repetitive motions have a proven soothing effect. Think of how some people drum their fingers on the table or rotate a pen when they are nervous.

On the same note, some cats engage in stress-induced grooming because it also helps release endorphins in the brain.

Furthermore, cats feel more secure and content when they mark their territory. Stretching the muscles also has a proven positive impact on the feline mood.

Many cats are declawed as kittens. The procedure is never pleasant, but it certainly is less traumatic at a young age, and many veterinarians combine declawing with spaying or neutering.

But while many cats get the procedure at eight weeks to five months old, some are declawed in adulthood. By the time they undergo the procedure, they already have an established scratching habit.

Habits aren’t easy to break, particularly if they are reinforced by instincts, and there is no negative stimulus. Simply put, why would a cat stop scratching if no one is against it? There is no motivation to break the habit.

Because a scratching post is perfect for jumping and climbing, cats use it to relieve built-up energy.

Whether experiencing zoomies from smelling catnip or being overly excited after the owner returns home from work, many cats run towards their scratching post to get rid of excess energy.

A cat that doesn’t have an opportunity to release excess energy may become hyperactive, running around the house at night, hunting everything moving, doing goofy actions, and engaging in destructive behavior.

The best way to keep a cat calm and well-behaved is to let it release its energy during the day by playing with it and encouraging it to use a scratching post.

If you’re considering buying a cat tree for a declawed cat, find one with many platforms located within a jump’s reach from each other.

Because declawed cats don’t climb as well as cats with claws, they need more horizontal than vertical space.