Can Cats Overdose on Catnip? 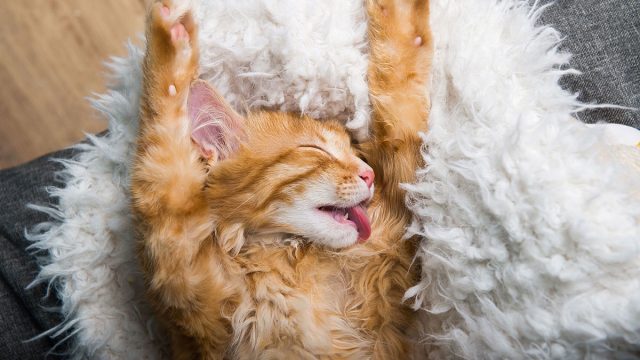 Many owners who consider trying out catnip’s magic or their pets wonder whether cats can overdose on catnip.

In short, yes. Cats can OD on catnip, but it is unlikely. The herb is considered safe for felines.

Catnip is among the best natural sedatives for cats, helping reduce anxiety and promote healthy sleep. However, catnip is versatile and can also act as a stimulant to encourage playtime.

But nothing is risk-free, and neither is catnip. Some cats might experience adverse effects from the herb because of individual intolerance.

The tricky part is that there’s no universal catnip dosage guideline, so you must determine the appropriate dose for your cat with a trial and error method.

Is Catnip Toxic to Cats?

The vast selection of catnip products for cats suggests the herb isn’t toxic to felines and even has health benefits, which is true. However, everything is poison if you consume enough of it.

For example, medications are helpful in moderation but extremely dangerous in high doses. A pint of beer makes you happy, but a bottle of whisky might kill you. So, what about catnip? Is catnip toxic to cats in high amounts?

Catnip belongs to the Labiatae mint family and is native to North America. Neither catnip leaves, stems, flowers or seeds are toxic to cats. The active ingredient nepetalactone, too, won’t cause poisoning.

Catnip isn’t a toxin but can cause a poisoning-like reaction if a cat consumes too much. Usually, a cat that overdoses on catnip will display signs of gastroenteric upset, lethargy, and disorientation.

No other symptoms apart from diarrhea and vomiting have been reported by owners of cats who overdosed on catnip. However, even mild gastroenteric upset might require veterinary care to make up for the fluid loss.

The body will remove excess nepetalactone from the system on its own through waste. The prognosis is positive – all cats recover without lasting effects.

It’s important to note that catnip overdose in cats is unlikely. Usually, catnip overdose occurs when a cat eats fresh flowers or leaves of the herb because they are much more potent than the dry herb or stems.

Catnip essential oil, too, is highly potent and might cause poisoning-like symptoms. Take caution when administering your pet fresh catnip or essential oil to avoid adverse effects.

How Does Catnip Work?

To understand what catnip does to cats and why overdose is unlikely, you should learn how catnip works. Catnip does its magic on cats because of a chemical nepetalactone mimicking feline mating pheromones.

For this reason, cats often exhibit behavior similar to mating – they roll on the floor, rub their head against surfaces, meow loudly, purr, and become overly affectionate.

However, not many know that catnip’s effect on cats depends on whether the cat sniffs or smells the herb. When a cat inhales catnip, it acts as a stimulant, resulting in the described behavior.

In that case, the effect kicks in immediately and lasts 10-15 minutes. When nepetalactone vapors hit the cat’s olfactory bulbs, they stimulate sensory neurons, provoking a response in several brain regions including the amygdala, responsible for an emotional response to stimuli.

When a cat ingests catnip, it has the opposite effect, acting like a sedative and causing the cat to become sleepy, disoriented, and mellow. In this case, catnip takes about 20-40 minutes to kick in.

Such a difference in onset occurs because when a cat eats catnip, it must first be digested by the gastroenteric tract. Then, nepetalactone travels to the liver and enters the bloodstream. Only afterward does it reach the brain.

If you need to sedate your cat before a trip to the vet, let it eat catnip treats. On the other hand, if you want to encourage your cat to play, let it smell some dry catnip.

Once catnip’s effect wears off, the cat will return to normal as if nothing happened. Interestingly, catnip isn’t the only herb that causes short periods of euphoria in cats – other herbs include Tatarian honeysuckle and silver vine.

Many owners are worried catnip is a drug that makes cats “high,” like the uncontrollable response humans experience when taking a hard drug. However, a cat’s response to catnip is very predictable and limited.

Another difference between hard drugs and catnip is that the latter doesn’t cause addiction. In fact, cats become desensitized to catnip’s effects for a while after having it, which is one of the reasons an overdose is nearly impossible.

How Much Catnip Is Too Much?

Catnip is safe for cats, but you should still know how much catnip is too much to avoid an overdose. Catnip overdose is unlikely because cats have an innate knowledge of how much catnip they need to feel the effect.

Once a cat sniffs catnip and begins experiencing the effects, it will lose interest in the herb, becoming desensitized to nepetalactone for some time. Therefore, a cat is unlikely to sniff too much catnip.

Problems might arise when a cat eats catnip because it doesn’t kick in immediately. Giving a cat a fresh catnip plant is especially risky because it’s highly potent and a cat never exposed to the herb before might overdose.

Be careful when giving your cat catnip essential oil to smell. Not only is it potent but it’s also a common irritant, causing skin rash and other unpleasant adverse effects.

There’s no need to worry or take precautions if your cat plays with catnip toys or bubbles. When giving your pet catnip treats or other edible products for the first time, start with a minimal dose.

If your cat responds positively, you can increase the dose. However, note that cats develop tolerance to catnip if they have it in high doses or frequently. Therefore, don’t increase the dose unless necessary.

Only give your cat catnip once or twice a week at most. More frequent exposure will lead to desensitization, preventing your cat from experiencing positive effects. Sensitivity might return after a long pause.

Can Cats Have Adverse Effects from Catnip?

Even if your cat doesn’t get overdosed on catnip, it might experience other adverse effects you should be aware of. The effects aren’t life-threatening but can lead to injuries and discomfort.

Catnip’s adverse effects on cats include gastroenteric upset, allergy, and behavioral changes. Flatulence, stomach cramps, and vomiting might occur even with small doses because the feline digestive system is sensitive.

Although catnip isn’t a common allergen, catnip allergy is possible. Depending on the way of exposure, an allergic cat might experience topical, respiratory, or gastroenteric symptoms.

Gastroenteric symptoms might be indistinguishable from stomach upset, so many owners never find out their pets are allergic to the herb. Respiratory symptoms include coughing, sneezing, runny nose, and watery eyes.

However, a cat might also sneeze because catnip particles got into its nose. Lastly, some cats might have a skin rash, itchiness, and hair loss if the catnip product gets onto their skin. These symptoms are common with catnip essential oil.

Some cats become disoriented from catnip, which is normal. However, supervise your cat to prevent it from injuring itself.

Another adverse effect of catnip is aggression. Some felines become hyperactive and hostile instead of calm, attacking other animals and humans.

If your cat is aggressive from catnip, refrain from giving it the herb again. Such an individual response is likely to repeat every time. Alternatively, you can make another trial with a lower dose to prevent overstimulation.

The good news is that your cat’s behavior will return to normal once the herb’s effect wears off. Supervise your cat to prevent an injury, but don’t touch it – let it calm down alone.

Does Catnip Work on All Cats?

Interestingly, catnip might have no effect on your cat, regardless of the dose. Research suggests about 50% of felines are unresponsive to nepetalactone because they lack the gene responsible for its recognition.

Kittens, too, have no response to catnip because they cannot yet recognize mating pheromones. Some kittens begin responding to catnip at four months, while others only start reacting by one year old.

Generally, you should wait until your cat reaches sexual maturity to give it catnip. The herb is safe for kittens but it will have no effect.

Older felines can feel catnip’s effects. However, many senior cats are desensitized to nepetalactone because they have had catnip too frequently.

If your cat doesn’t react to catnip, try catnip alternatives like Tatarian honeysuckle, silver vine, or valerian root. These herbs are equally safe for cats and have similar effects.

Furthermore, unlike catnip, some catnip alternatives work on kittens, encouraging them to play or calming them. Silver vine or valerian root are also great solutions if your cat has had catnip too frequently and became unresponsive to its effects.