Can Cats Lose Their Voice? 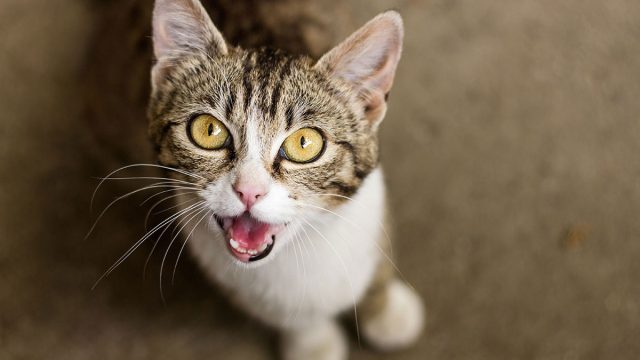 Cats can lose their voice for many reasons, including viral infections, rabies, thyroid problems, and injuries.

Regardless of the reason, voice loss or hoarseness aren’t to be taken lightly and require veterinary attention to rule out life-threatening diseases.

We’re all familiar with the feeling of hoarseness when we catch a cold, smoke too much, or party all night long. Cats, too, might have hoarse meows, but you must be observant to notice when it happens.

The difference is that hoarseness in humans rarely signals a severe issue unless accompanied by other symptoms. Voice loss in cats, in turn, is rarely harmless.

Learn about the reasons cats lose voice to provide your pet with timely care and prevent the problem from occurring in the future.

One of the most common reasons for a cat losing its voice is laryngitis or inflammation of the larynx (voice box). Laryngitis in cats occurs for many reasons, including irritant inhalation, blockage, paralysis of the laryngeal nerve, and throat cancer.

Sometimes, laryngitis results from viruses. In this case, it might also involve symptoms like runny nose, watery eyes, sneezing, loss of appetite, and lack of energy. Eye discharge might be clear, reddish, yellow, or green.

Depending on the cause, the cat might not lose its voice entirely but gradually get silent or sound odd, similar to how human voice changes when they have a sore throat.

Technically, laryngitis isn’t a standalone medical condition but a symptom of an underlying issue. However, we will review some causes in more detail further.

Laryngitis treatment depends on the underlying cause. Because laryngitis is a symptom on its own, the vet will fight the primary medical condition first, but they can take measures to ease symptoms during treatment.

If the vet detects fluid buildup in the larynx, they might prescribe your cat diuretics. Or, if your cat is in pain, it might receive a mild painkiller.

Rabies isn’t the first medical condition one would think of when their cat has lost its voice. However, rabies causes hoarseness because it affects the entire nervous system. Assess the symptoms if your cat walks outdoors and isn’t vaccinated against rabies.

The primary symptom of rabies in cats is sudden and severe behavior change – from friendly to aggressive and vice versa. The cat loses appetite and appears nervous, irritable, and hyper-excited.

Changes in vocalization occur at the first stage of disease, along with behavior changes. After some days, the infected cat enters the “mad dog” stage, becoming aggressive, experiencing hallucinations, and attacking everyone who comes close.

In the final stage, the infected cat becomes weak and paralyzed, unable to swallow or move. Paralysis causes drooling and foaming from the mouth.

The clinical picture is terrifying, but the good news is that you can determine whether your cat has rabies by assessing its body for bite marks. The virus only transmits through saliva entering a wound.

The tricky part is that rabies might take weeks or months to show symptoms, depending on the bite severity and proximity to the spinal cord. Unfortunately, there is no treatment for rabies at the time of writing.

While colds are common in humans and typically resolve without medical help, cats are different. Neither of these viruses should be taken lightly because they can escalate and cause life-threatening symptoms.

Feline herpes virus, or feline viral rhinotracheitis, is species-specific and does not transmit to humans or other animals. The symptoms include discharge from the eyes, runny nose, coughing, sneezing, and loss of voice.

A cat can become infected with the herpes virus from contact with another cat or objects contaminated with particles. After contracting the infection, cats become carriers. The virus can reactivate at any moment.

Feline calicivirus is even worse because in addition to respiratory symptoms it causes mouth ulcers, preventing the cat from eating. This virus has a death rate of up to 67%.

Lastly, feline coronavirus might cause respiratory symptoms accompanied by vomiting and diarrhea. About half of all cats in single-pet households and 90% of cats in multi-pet households become infected with the virus.

Most cats show mild symptoms which resolve on their own. However, 5%-10% of cats develop feline infectious peritonitis with nearly 100% mortality. The bottom line? Don’t take your cat’s sneezing and hoarseness lightly.

Hyperthyroidism, or excess of the thyroid hormone, is a relatively common disease typically affecting older felines. Only 5% of cats affected by hyperthyroidism are under ten years of age.

Hyperthyroidism might result from a non-cancerous tumor adenoma, diet, or exposure to thyroid-disrupting chemicals in the environment.

Symptoms of hyperthyroidism in cats include weight loss, restlessness, increased water consumption and urination, and aggressiveness. Some cats might exhibit periodic vomiting and diarrhea, and their fur might appear dull and unkempt.

A vet can diagnose hyperthyroidism by taking a complete blood count and thyroid scan. The treatment depends on the cause – if the condition is caused by a tumor, it requires surgical removal.

If the condition has a different cause, the vet might prescribe the cat oral medication to control the effects of an overly active thyroid gland. Radioactive iodine and methimazole are the most common treatment options.

Voice loss or changes may result from a growth in the voice box or trachea, whether cancerous or not. In the case of cancerous growths, the cat will exhibit other symptoms including gastroenteric problems, loss of appetite, anorexia, stiffness, foul odor from the mouth, and lethargy.

Some cats have a persistent cough and other respiratory symptoms. If the tumor is non-cancerous, the cat might have no other symptoms apart from voice changes and a lump under the skin, but some felines display signs similar to cancer.

In either case, the cat’s voice should return once you resolve the underlying issue. Cancer and tumor treatment methods include surgical removal, oral treatment, radiation therapy, and intravenous chemotherapy.

Believe it or not, sometimes, the cause of voice loss in cats is as simple as prolonged meowing. Think of how you lose your voice after shouting at a concert – cats, too, can have difficulty meowing if they’ve been doing it for too long.

Perhaps, your cat has been meowing for a long time when you were away or asking to go out. If your cat doesn’t show other worrying symptoms, wait and see whether the issue resolves on its own.

Note that your cat should get back to normal after a few days at most. If it takes longer, you should seek veterinary help to rule out medical conditions.

Laryngitis in cats sometimes results from traumatic injury or physical obstruction. The cat might have swallowed a sharp object, a live bee, or a thread, causing voice changes.

The signs a cat swallowed something include vomiting, diarrhea, decreased appetite, behavior changes, and pawing at the face or mouth. If the cat can’t swallow the object, you might notice difficulty breathing.

Larynx obstruction is a condition requiring urgent veterinary help. Sometimes, the cat might be able to pass the foreign body without help, and any symptoms will resolve on their own.

However, foreign body obstruction can lead to lasting consequences or death. Don’t risk it – bring your cat to the vet if you suspect your pet might have eaten something or injured itself.

How to Help at Home

As you can see, most causes of laryngitis in cats are severe and require veterinary help because they can lead to death without treatment.

However, if your cat has lost its voice because of prolonged meowing or irritant exposure, you can try to help it at home. A great way to ease your cat’s discomfort is running a dehumidifier.

Cleaning the house is also helpful because cats might lose their voice from dust or pollen, particularly if they’re allergic. If your cat was diagnosed with an upper respiratory infection, clean its eyes and nose with a soft damp cloth to remove discharge.

You can also boost your cat’s immune system to fight the condition with a healthy diet and supplements. Consult your vet before incorporating any add-ons into your cat’s diet.

Sometimes, symptoms of viral infections and other medical conditions clear up on their own. But don’t get fooled – many conditions become chronic and might reactivate at any moment.

Therefore, don’t postpone a vet visit if your cat’s voice doesn’t return after a few days, even if you notice no other symptoms. Some diseases take much time to inflict severe damage. But once they do, treatment is challenging.

If laryngitis results from an object stuck in the throat, it requires urgent surgical intervention. You should contact your vet immediately to save your furry friend.

Welcome to Catoxy. I have one passion in life: caring for cats in my cattery. On this website, I share all the tips and tricks that help cats live their best nine lives, as a cattery owner.
Topics
Recent Articles