Can Cats Kill Each Other? 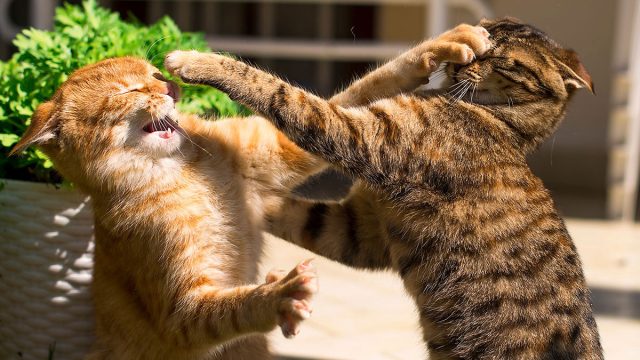 If you’ve ever seen a cat fight, thinking about whether cats can kill each other is natural.

Cat fights look and sound horrifying, raising concerns about the health and safety of those violent furballs. In theory, cats can kill each other.

However, cats don’t fight with the intention of killing their opponent. In fact, felines do everything to avoid physical confrontation, resorting to it only in rare cases.

Still, you shouldn’t take cat fights lightly because they can result in severe injuries. If your cats hate each other, you should identify the root of the issue and resolve it.

Learning about the causes of aggression in cats and how to stop cats from fighting is crucial to ensure the physical and mental well-being of your pets.

Why Do Cats Fight?

Cats typically strive to avoid conflict unless there’s no other choice, whether with other felines or another specie. The reason is that cats hunt alone, and injuries seriously compromise their survival abilities.

However, you might sometimes encounter a cat fight. The most common reason for cat fights is territorial aggression. Felines are territorial creatures, so they will fight to defend their habitat and resources.

Usually, cats from a different social circle will avoid the territory of another cat if it’s marked or after a verbal warning. But sometimes, the territories of the two cats overlap, causing them to escalate to a fight.

Territorial aggression is common both in stray and house cats. In the latter case, it frequently occurs when one of the cats has been living in the household for a long time and another cat is new to the family.

Another reason for aggression between house cats is a lack of socialization. A cat raised alone that has never been exposed to other felines might grow hostile to other animals.

Some house cats might also be jealous of the owner’s attention, attacking the cat that “steals” their favorite human to eliminate the competition. Two male or two female cats might fight because of mating competition, particularly if they aren’t fixed.

Lastly, female felines might behave aggressively protecting their kittens. Maternal aggression can be extreme and lead to deadly fights.

However, it’s important to distinguish between aggressive fighting and play fighting. Hunting is a form of play for cats, so two felines chasing and biting each other might be having fun.

Can Cats Fight to Death?

Most cat fights start with hissing, growling, and other vocal expressions of aggression. If neither of the opponents backs down, the conflict escalates to short blows until the cats split and start posturing aggressively again. Fighting is the last resort.

However, cats fight to the death if the reason is worthy – for example, if they fight for territory or a mother cat protects her kittens. Sometimes, death occurs because one of the cats is significantly weaker than the other one.

Cats within the same household are unlikely to fight to the death because they understand they live on the same territory. Fighting is unsustainable, so they must learn to collaborate, even if they are hesitant at first.

Furthermore, owners will likely interrupt the fight before cats manage to cause severe injuries to each other. That’s assuming cats aren’t left alone without supervision.

There are exceptions, of course – some cats are naturally aggressive or have mental problems that prevent them from controlling their impulses. Intact male cats and mother felines are more likely to fight to the death because of hormones.

Can Cats Cause Each Other Life-Threatening Injuries?

Cats are unlikely to deliberately fight to the death, but they can cause each other injuries leading to death. Cat bites and scratches quickly become infected if left untreated because they are small yet deep, trapping bacteria under the skin.

If a cat attacks another cat in the face, it might leave it without an eye, which, apart from causing partial blindness, also increases infection risk.

Both stray and house cats can cause each other life-threatening injuries when fighting. However, stray cats are much more likely to die from those injuries because they don’t have caring owners to provide them with veterinary help.

Even if your house cats receive severe injuries during a fight, they should be alright, assuming they receive veterinary care. Wounds are easy to manage until they get infected, so early action is crucial to preventing infection.

Either way, you should know the symptoms of infection in cats to spot a problem if it occurs. The symptoms include fever, lethargy, swelling of the affected area, loss of appetite, and hot spots or pain.

How to Distinguish Play Fighting from Real Fight

If you have two cats, learn to distinguish play fighting from a real fight. This knowledge is crucial to assessing the relationship between your pets and providing them with timely help if necessary, preventing conflict escalation.

Both playing and fighting involve chasing each other, jumping, biting, and even hissing or growling. Sometimes, cat fights appear aggressive, but you should closely watch your pets’ body language to determine whether the play is harmless.

When cats play, they take turns, letting one chase another and be on the top of the wrestling huddle, then vice versa. The cats might even take breaks to rest and look around, then resume without warning.

Such play fights often start for no reason – for instance, one of the cats might notice another twitch its tail and jump on it. Play fighting isn’t accompanied by loud meowing, crying, or growling, although moderate vocalization is common.

Playing cats might bite each other, but they do so lightly to avoid injuring their playmate. Lastly, playing cats usually have their ears pointing forward.

Fighting cats have their ears pressed back, backs arched, and tails puffed up or hidden between the back legs. Fighting never starts for no reason or suddenly – the cats first warn each other by hissing, growling, meowing, and displaying an aggressive posture.

If one of your cats is chasing another who is clearly tired or scared, they aren’t playing. Severe biting and scratching leaving marks and wounds also signal aggression.

Don’t assume that your cats are just playing if they typically get along. Fights sometimes arise even between cats that are friends. Instead, assess all the signs because it’s better to be safe than sorry.

How to Stop a Cat Fight

Learn how to stop a cat fight correctly to avoid hurting yourself or worsening the situation. Many owners wonder whether you should let cats fight it out. The answer is definitely “no,” you should never let your cats continue fighting.

However, don’t jump in the middle of the conflict either, separating the cats with bare hands. Aggressive cats won’t care that you haven’t done anything wrong – they can cause severe injury.

Instead, startle them by making a loud noise – for instance, clap, shout, or drop a pan on the floor. The noise must be sudden and loud because quiet rattling or a treat bag won’t distract cats trying to resolve a territorial conflict.

Even better if you could prevent the conflict from happening by intervening once you notice the first worrying signs. As soon as your cats begin hissing, growling, or taking aggressive postures, place a divider between them.

The divider could be a piece of cardboard, a large cushion, or anything else to obstruct their view. Don’t simply stand between your cats because they might harm you if one decides to attack.

Don’t touch your cats right after separating them. Let your cats calm down – after you distract them, they will likely hide somewhere. Leave them there until they decide to come out, but don’t leave them without supervision.

How to Prevent Cat Fights

You can’t stay home 24/7 to supervise your cats, so you should learn how to prevent cat fights if your pets don’t get along. First, you need to identify the reason your cats are fighting.

If your cats fight because of territorial aggression, separate and increase resources. Each cat should have personal food and water bowls, a litter box, and a bed.

If your cats have different diets and one tries to steal the food of another, feed your cats separately. Spaying or neutering is the best way to stop aggression between cats of the same sex. If fixing is impossible, minimize your cat interactions.

If your female feline recently had babies, ensure that no other cats come close to her nest. Cats might be aggressive even to owners touching their kittens.

Pay equal attention to both pets if you recently took in a second cat and your old cat is jealous.

Note that even if you resolve the underlying problem, your cats will need time to adjust to each other. You can use pheromone products to speed up the process, but remember to give your pets space and time.