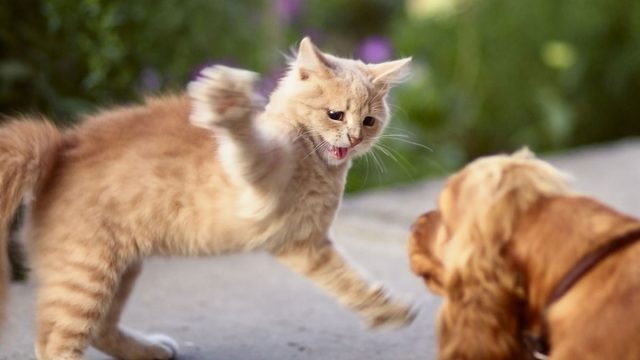 A dog chasing a cat is an old-standing cliché, but sometimes, the roles reverse, in which case you might wonder – can cats kill dogs?

An aggressive cat can cause severe damage to a human or another animal, so the concern is natural.

Yes, dogs are larger than cats (well, most dogs). Yes, dogs are fast runners. Yes, felines tend to avoid confrontations with dogs because they know their odds of winning are low.

Still, a cat can seriously harm a dog in self-defense or in a territorial fight. Theoretically, a large cat might even kill a smaller dog, but in reality, such incidents are unlikely.

Learning how to train a cat and dog to get along is crucial for every owner to avoid fights and ensure the mental well-being of their furry friends.

Domestic cats typically avoid interactions with dogs, even if the dog is small. They have an innate understanding that dogs are dangerous because they are larger and stronger.

Therefore, the only scenario where a cat can harm a dog is in self-defense. If a dog attacks a cat, it will either run away or fight back. Still, a domestic cat might scratch or bite a dog but is unlikely to kill it.

Firstly, dogs have thick skin, and killing a dog with a few scratches isn’t easy. The scratches might get infected and lead to death, but the cat isn’t the direct cause of death in this case.

Secondly, killing the dog isn’t the cat’s goal in the case of self-defense. The cat only needs to scare the dog and win some time to escape. The cat won’t spend an extra second with the attacker.

Stray cats, too, are unlikely to kill a dog. They will never attack first, even if it’s a tiny Chihuahua, but they can fight back if the dog threatens them.

On the flip side, North America has rich fauna with many species of wild cats. The fact that a jaguar can kill a dog is obvious, but there are significantly smaller feral cats that also pose danger to dogs.

For example, ocelots are common in Mexico and the southern part of the U.S. They are twice as big as domestic cats and are incredibly powerful for their size because they spend days hunting and climbing trees.

An ocelot can easily kill a medium-sized dog, but the odds of your dog encountering an ocelot are low because these creatures tend to avoid interactions with humans. Stray dogs, on the other hand, are in danger.

Jaguarundi is another wild cat specie that’s only slightly larger than a domestic cat but can easily kill a dog or cause life-threatening injuries. These animals are fearless and are used to fighting to the death, despite their cute appearance.

Canada lynx only weighs 20-26 pounds, which is about the weight of an average Maine Coon, but it’s significantly more likely to kill a dog than a large-breed domestic cat.

Wild cats have more athletic build than average domestic cats and stronger instincts. They are very territorial. Although a wild cat won’t attack a dog first, it can kill it defending its habitat, babies, or resources.

Depends On the Dog’s Size

Whether a cat can kill a dog or severely harm it largely depends on the dog’s size. All house cats are about the same size, ranging from five to 25 pounds. However, dogs come in all sizes, shapes, and temperaments.

A domestic cat can kill a small dog like a Papillon or Chihuahua, although it still won’t attack the dog first. Even small dogs have loud barks, threatening growls, and sharp teeth and claws.

However, killing a medium-sized or large dog is nearly impossible for a cat. Such dogs have thicker skin and bigger teeth and run faster, so they are likely to win the fight with a cat.

The dog’s temperament also plays a role. Some working dogs are tiny, like Yorkshire Terriers or Cairn Terriers, but they are courageous, confident, and barky. Such dogs are more likely to chase away a cat even if it’s larger.

On the other hand, a Japanese Chin or Pekingese with a calmer temperament will likely be afraid of a cat. Even some larger dogs avoid interactions with cats because they are naturally fearful or had poor experiences in puppyhood.

Overall, puppies are in more danger from cats because they don’t yet know how to react to felines and don’t have complete control of their bodies. But a cat won’t attack a puppy for no reason, especially a female cat with maternal instincts.

Cat Can Cause a Severe Injury

While a cat is unlikely to kill a dog, a cat can severely injure a dog. A cat won’t scratch a dog for no reason, but it can leave severe harm when trying to fight back and escape.

Dogs scratched by cats often get corneal ulcers. Cat bites and scratches tend to quickly turn infectious. Thus, you should always disinfect your dog’s wounds after a fight with a cat, even if they seem minor.

Furthermore, cats typically choose strategic areas for an attack, such as the face. If a cat jumps on the dog’s face, it can leave it without an eye.

Still, a dog is much more likely to cause severe harm to a cat during a fight. Either way, you should never let your pets “fight it off” because the confrontation will end poorly for both.

Can a Pack of Stray Cats Kill a Dog?

Domestic cats don’t hunt in packs, and they never hunt dogs because they don’t perceive them as a source of meat. Felines are solitary hunters and typically target smaller animals like rodents and birds.

However, a pack of stray cats can kill a dog, especially if the dog is small, young, old, or sick and roams alone. It’s important to note that a pack of cats won’t “hunt” a dog for food or fun.

The most likely scenario where a group of strays could kill a dog is a territorial fight. Felines are territorial creatures, so if a dog comes too close to a cat’s habitat or food, they are likely to attack.

And since a dog cannot fight back a dozen of cats, it can get killed. However, such a scenario is unlikely because dogs are intelligent and will avoid coming close to a pack of stray cats.

How Likely Is a Cat to Kill a Dog?

A cat is unlikely to kill a dog in a fight, even if the dog is small. Cats and dogs run at the same speed, so the dog can escape. But even if it doesn’t run away, canines tend to be tougher than felines.

However, a cat is very likely to cause serious injuries that can lead to death if left untreated. The risk is higher if the dog gets attacked by a stray cat that might carry infections or viruses, including rabies.

Therefore, you should always have your dog seen by a vet after it fought with a cat to rule out the possibility of diseases and infectious wounds.

If you own both a dog and a cat, you should worry about the cat more because it’s more likely to lose in a fight. Never let your pets fight – separate them as soon as possible.

Can Cats and Dogs Coexist Peacefully?

Cats and dogs quickly form friendships if they are introduced correctly. You can teach a cat and a dog of any breed and size to get along if you’re patient, dedicated, and don’t make mistakes.

The best time to introduce a cat to a dog is when the animals are still young because they adapt better. The first interaction matters – don’t let the cat and dog meet face-to-face because they will growl at each other.

Instead, learn how to introduce a cat to a dog correctly. Gradually increase the time your pets spend together and the distance between them. Start by putting the cat in another room so the dog can sniff it through the door.

When the dog becomes desensitized to the cat’s smell, you can put the cat in an enclosure and let the dog see it. If the animals react poorly, separate them until the next time.

Eventually, your pets will lose reaction to each other and might even begin playing or sleeping together. However, learn to distinguish between playful chasing and attacks.

If your pets take turns in chasing each other, they are playing. But if the dog chases the cat and the cat appears scared, you need to take action.

Some dogs have too strong a prey drive, want to be alpha, or are jealous of the owner’s attention and won’t let a cat in the house live peacefully. In that case, you might need to seek the help of a canine behavioral specialist.