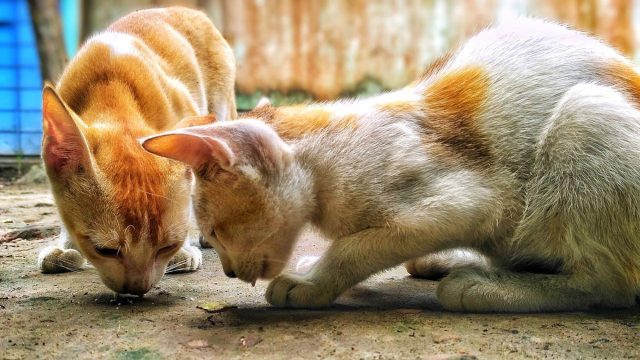 Cats can eat various human foods, including apples, bananas, and yogurt, but can cats eat cucumbers?

Veterinarians see no threat to a cat’s health in cucumbers, although consuming veggies isn’t natural for felines.

However, “safe” doesn’t yet mean “healthy,” and why would a cat eat a cucumber anyway? Aren’t cats supposed to like meat and fish?

We aren’t here to condemn the odd taste preferences or excessive curiosity of some felines. Most importantly, a craving for cucumbers won’t harm your pet.

However, every caring owner should know the appropriate cucumber serving size for a cat and watch out for the symptoms of gastroenteric upset.

Are Cucumbers Safe for Cats?

The primary concern with cats eating human food is their safety. So, are cucumbers safe for cats? In short, yes. Cucumbers don’t contain any toxic elements to felines, unlike cherries, grapes, or apple seeds.

Cucumbers don’t affect a cat’s nervous system and won’t cause hyperactivity due to the low sugar content. Cucumbers are also low in calories and fat, so it’s one of the best treats for cats with a strict diet.

Of course, moderation is crucial when feeding cats cucumbers or other human food because excessive consumption of cucumbers poses multiple threats to felines, including weight increase.

However, this only refers to fresh cucumbers. Pickled cucumbers are dangerous for cats because they are high in sodium. Sodium is an essential element of any cat’s diet, but amounts exceeding 41 milligrams a day can be highly toxic.

Furthermore, pickles often contain veggies and herbs that can cause poisoning in cats, such as garlic. For cats, a toxic dose of garlic is one gram per five pounds of body weight.

Therefore, an average ten-pound cat would have to eat only two grams of garlic to get poisoned. Read the ingredient list on the label if your cat has accidentally swallowed a pickle.

Another potential risk is chemicals used to treat commercially grown cucumbers. Everyone knows to wash veggies before eating them, but not every owner remembers the rule before feeding cucumbers to their cat.

Cucumbers have a layer of natural wax that absorbs chemicals, preventing them from getting into the pulp. However, some chemicals may be left in the peel, so remove the peel before feeding your cat cucumbers.

How Many Cucumbers Can a Cat Eat?

Although cucumbers are among the safest human foods for cats, the serving size plays a critical role. Cats are carnivores, and their body has developed to digest large amounts of protein but not carbohydrates.

For this reason, a cat’s diet should contain no more than 20% of carbohydrates. Cucumbers aren’t a substitute for a meat-based meal but work excellent as an occasional treat.

But how many cucumbers can a cat eat without adverse effects? Veterinarians recommend that treats don’t exceed 10% of a cat’s daily calorie intake. An adult cat should consume 22-30 calories per pound, depending on the activity level.

So, an eight-pound cat should consume 175-240 calories daily, and treats should only account for 17-25 calories. A half-cup or two-ounce serving of cucumbers contains roughly 30 calories, so a cat can eat a bit less.

Another point to keep in mind is the high water content of cucumbers. Extra hydration is generally beneficial for cats eating only dry food, but excessive cucumber consumption can lead to diarrhea.

Cucumbers also contain fiber, which is an integral element of any cat’s diet and necessary for the correct work of the digestive system. However, if the fiber content in a cat’s diet exceeds 10%, it may suffer from gastroenteric upset.

Are There Any Benefits to Feeding Cats Cucumbers?

Cucumbers aren’t a part of a natural feline diet, but this doesn’t mean that moderate consumption of cucumbers isn’t healthy for cats. The health benefits of feeding cats cucumbers outweigh the pitfalls.

Cucumbers are a healthy treat low in calories, fats, and sugars, suitable for diabetic and overweight cats.

Cucumbers also contain approximately 0.3 grams of fiber per half-cup serving. This isn’t much compared to most other veggies and fruits, but still beneficial for cats struggling with chronic constipation.

Cucumbers reduce cancer risk because they contain cucurbitacins and flavonoid fisetin. Although researchers have only studied the effects of these elements on human cancer, the chances are that they are equally effective on cats.

The sodium content in cucumbers is negligible, under one milligram per a half-cup serving. Meanwhile, cucumbers are rich in potassium, vitamin C, and vitamin K.

Potassium is an electrolyte responsible for the proper function of the body’s muscular system. When potassium in a cat’s blood is low, a medical condition that is known as hypokalemia, a cat may have difficulty walking, jumping, or even holding its weight.

Vitamin C is essential for the immune system’s health and tissue growth. Vitamin K helps to bind calcium in bones and enables blood coagulation. In other words, the elements contained in cucumbers are essential for every cat.

However, a cat should get all the necessary elements from dry food. Excessive consumption of cucumbers may lead to potassium, fiber, or vitamin over-supplementation, which is just as dangerous as a deficiency, so keep the servings small.

Why Does My Cat Eat Cucumbers?

Cats tend to be picky eaters that can refuse even high-quality meat or salmon, so a cat’s obsession with cucumbers surprises many owners. Unfortunately, there’s no definite explanation for why a cat likes cucumbers.

Some cats are just curious and love to try new flavors. If a cat has never tried cucumbers before, it may persistently try to get a bite of it to get acquainted with the new smell, taste, and texture.

Most cats will only try a little piece of cucumber and lose interest because it doesn’t contain protein, but some felines have odd taste preferences. Each cat’s personality is unique, and there’s nothing wrong with a cat craving cucumbers.

A cat may also crave cucumbers because of the high water content. Some cats find the taste of tap water too bland, while cucumbers have a nice flavor and can quench the thirst.

If your cat is picky about water but likes cucumbers, you may add a cucumber into its water bowl to make it more appealing. Lastly, some cats may like the crunchy texture and sound.

Interestingly, you may come across numerous videos depicting cats going mad over the sheer sight of cucumbers.

There’s no scientific explanation why cats are afraid of cucumbers – perhaps, they are simply spooked by a sudden appearance of a random object resembling a snake.

Although cucumbers are generally safe for cats, they aren’t risk-free. After giving your cat a cucumber for the first time, you should monitor its behavior and health state to avoid missing signs of food intolerance.

A cat’s gastroenteric tract is delicate, and even a little bit of new food can cause adverse reactions. Usually, the symptoms of food intolerance in cats start to occur within an hour of ingesting the food.

The symptoms include vomiting, diarrhea, constipation, flatulence, bloating, and discomfort when touching the stomach. In most cases, the symptoms last for up to 12 hours and don’t require veterinary help.

How to Spot a Food Allergy

Not many feline owners know the difference between food intolerance vs. food allergy in cats because the symptoms are similar. But while the former originates in the gastroenteric tract, the latter results from the immune system’s response.

True food allergies aren’t common in cats and are hard to diagnose. Apart from gastroenteric symptoms, food allergy can include respiratory, cardiovascular, and topical symptoms, such as difficulty breathing, coughing, increased heart rate, or skin rash.

If you notice any such symptoms, refrain from feeding your cat cucumbers ever again, regardless of whether it’s intolerant or allergic.

In the case of severe allergy, the cat may be prescribed antihistamines, but the symptoms of mild allergy usually go away after several hours.

Now that you’re informed about the health benefits and risks of feeding cats cucumbers, you can make a well-weighed decision regarding the suitability of such a treat for your pet.

If you decide to feed your cat cucumbers, follow a few safety tips. First, consult with your veterinarian about any underlying medical conditions and recommended nutrient content in your cat’s diet.

If the veterinarian has nothing against cucumbers in your pet’s diet, calculate the appropriate serving size based on your cat’s weight and activity level.

Only feed your pet with fresh cucumbers without add-ons like salt or herbs. Wash the cucumber beforehand. Ideally, remove the peel to minimize the risk of chemical poisoning.

Start by giving your cat a small slice and monitor its body reaction throughout the entire day to ensure your pet doesn’t have a gastroenteric upset. Always cut cucumbers into small bite-sized pieces.