Can Cats And Racoons Get Along? 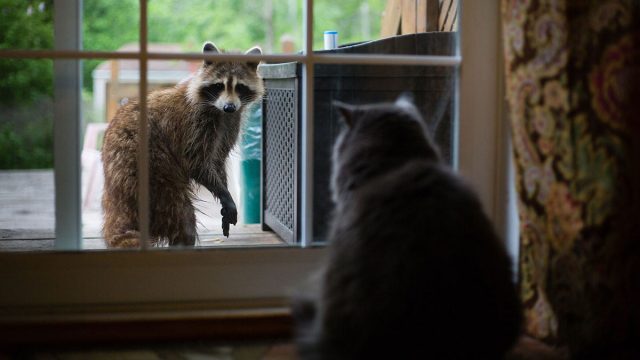 If you live in an area plentiful with feral animals that often visit your backyard, you may wonder – can cats and raccoons get along?

In short, yes, cats and raccoons get along surprisingly well – but this friendship isn’t without pitfalls.

Cats and raccoons belong to different taxonomical families but share common ancestors and have many behavioral and visual similarities.

There are even reports of tame raccoons mating with domestic cats, although this topic is surrounded by many myths. More commonly, cats simply share food with raccoons.

Raccoons may seem adorable, but feral animals often are dangerous.

Raccoons are aggressive only when someone threatens them or their belongings, but they are notorious for their mischievous demeanor which sometimes causes trouble to humans and other animals.

Raccoons are invasive species that enter human environments without any fear. Although raccoons will not attack humans or cats for no reason, they can defend themselves if a cat or person gets too close.

Most recorded cases of raccoon attacks on humans are self-defense. Since raccoons are at risk of being attacked by predators and humans are much larger, they perceive us as a potential threat.

However, cats are significantly smaller, so a raccoon is more likely to perceive a cat as equal. Still, territorial aggression is possible, particularly if the cat is hostile towards the fluffy intruder.

Plus, like all wild animals, raccoons are at risk of rabies, which can cause unprovoked aggression.

Fortunately, authorities do everything in their power to prevent the spread of the virus among feral animals, so the problem is unlikely.

Raccoons don’t see cats as prey, so they won’t hunt cats. Similarly, cats don’t perceive raccoons as a source of meat because they are too large. However, raccoons can attack kittens given their small size.

Depends On the Cat’s Personality

Whether aggression will arise between a raccoon and a cat largely depends on the cat’s personality. Because raccoons don’t perceive cats as a threat, they are unlikely to be hostile unless the cat starts a confrontation.

Calm, outgoing cats that either ignore other animals or try to make friends with them can get along with raccoons.

However, most felines are introverted and territorial creatures that will fight anyone encroaching on their belongings or space.

If the raccoon enters the backyard or house and approaches the cat’s feeding or sleeping area, the cat is very likely to respond aggressively, either hissing or growling, or engaging in physical contact.

Some cats are shy and might be terrified by the sight of a raccoon. Although an afraid cat won’t begin a fight, it certainly won’t become friends with the striped creature.

Raccoons are omnivores, meaning they eat anything, including cat kibble. These animals are notorious for their theft skills and can find a way to enter the house even if you take precautions.

A raccoon stealing cat food is a common problem, particularly among those leaving cat food out on the porch for feral cats to feed or for the house cat to eat during a walk.

In most cases, the relationship between a cat and a raccoon stealing its food won’t develop well because cats are territorial. But occasionally, cats accept that they have to share food with raccoons.

That said, a cat allowing a raccoon to eat its food likely doesn’t do it because they’re friends.

The most plausible reason is the raccoon’s dominance because raccoons are bigger and stronger, so they are almost guaranteed to win a cat in a fight.

Raccoons often intimidate cats to steal their food. If the raccoon is hungry, it can even attack a cat.

It’s best to keep your cat’s food indoors and always lock the door and windows at night to prevent your pet from fighting with raccoons over it.

If you find raccoons cute, leave them individual servings outdoors, but don’t let your cat eat from the same bowl.

Are They Friends or Ignore Each Other?

There are videos and stories of cats and raccoons seemingly getting along, coexisting peacefully in the same environment, and even sharing food bowls.

But can cats and raccoons be friends, or do they simply ignore each other? The question is tricky because animals cannot express their feelings and have different perceptions of friendship.

The signs that cats are friends include sleeping together, chasing each other in turns, sharing food, and grooming each other.

A raccoon is unlikely to groom a cat, although a cat can groom a raccoon. A raccoon and a cat also are unlikely to sleep together.

However, if a raccoon and cat share food or water or play together, you can be sure they get along.

In most cases, however, a cat and raccoon ignore each other rather than have warm feelings. You should supervise your cat if there are raccoons in your area even if they don’t fight.

Can a Pet Raccoon Become Friends with a Cat?

Although raccoons are wild animals, some people want to have a pet raccoon because they’re cute and behave funnily.

Having a pet raccoon is possible, but it’s rare. Plus, raccoons aren’t domesticated. These creatures are intelligent, outgoing, and playful. They can get along with people, and some even manage to tame a raccoon.

Still, even a tamed raccoon retains wild instincts that can cause problems in interaction with cats or dogs. A pet raccoon can attack a cat in self-defense or be territorial.

Plus, raccoons are mischievous, whereas cats love silence and peace. A cat is likely to be stressed or anxious living with a raccoon, which can lead to aggression. Keeping a raccoon quiet and away from a cat’s belongings is challenging.

Can a Cat Get a Disease from a Raccoon?

Even though cats can get along with raccoons with some caveats, you shouldn’t allow your cat to spend time with feral animals. The primary risk of raccoon contact with a cat is disease spread.

A cat can get raccoon roundworms by sniffing or ingesting eggs from its feces, which can make the cat severely ill and even lead to death if left untreated.

Giardiasis is a lesser-known disease a cat can get from a raccoon. It’s a protozoon disease resulting from a cat drinking the same water as the infected animal, so the risk is very high if the raccoon drinks from the cat’s bowl.

Giardiasis affects the gastroenteric tract and causes diarrhea, anorexia, and cramps. Another risk is Baylisacaris procyonis, or raccoon disease, a neurological condition caused by a type of worm using raccoons as permanent hosts.

Another raccoon disease is distemper. This highly contagious virus affects many animal species – raccoons, ferrets, skunks, dogs, and cats, and is typically incurable and fatal.

Because the symptoms can easily be mistaken for other conditions, Leptospirosis is difficult to treat.

Because some diseases spread through water or air, it’s best to keep your cat from interacting with feral animals altogether.

Can Cats and Raccoons Breed?

Owners of intact felines that often wander around and interact with raccoons may wonder – can cats and raccoons breed?

In short, it is unlikely, so there is no reason to worry about your pet becoming pregnant with a raccoon’s offspring.

However, there are scientific reports of tame raccoons mating with wild female cats. There’s even a myth saying that Maine Coons are part raccoons, but research has shown it is nothing else than a legend.

Raccoons indeed can mate with cats in rare instances, but they cannot reproduce because of a biological mechanism called reproductive isolation, preventing egg fertilization.

Because cats and raccoons are different species, they cannot make offspring. Raccoons belong to the Procyonidae taxonomic family, whereas cats belong to the Felidae family.

However, there are known cases of cats successfully breeding with other species within their family, like Asian Leopard Cat (resulting in Bengal cats) and the Asian jungle cat (resulting in Chausie).

So, the good news is that even if your cat becomes friends with a raccoon, you won’t have to deal with baby kitten-coons.

The bad news is that if mating occurs, the cat may become severely sick with diseases plentiful in wild animals.