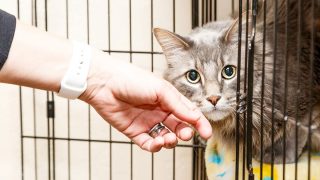 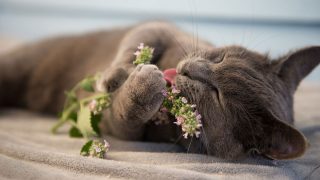 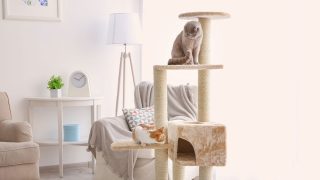 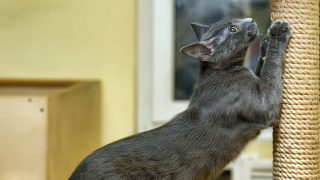 Can Cats And Rabbits Get Along? 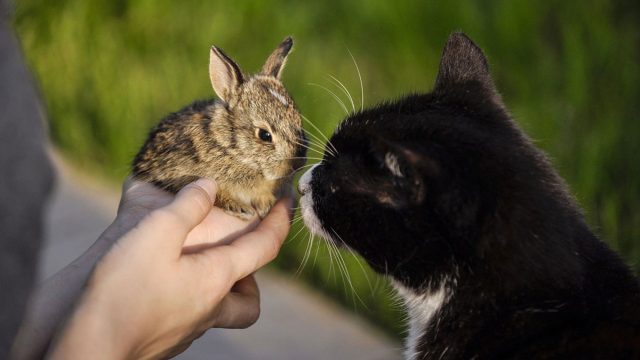 Keeping together herbivore and carnivore pets is alarming to any prospective owner, but it isn’t impossible.

Numerous pictures and videos of cats sleeping together, cleaning, or playing with rabbits are a clear enough answer to “can cats and bunnies get along?”.

However, the owner should know how to introduce new pets to each other correctly and be aware of the risks.

Remember that each situation is unique, and each animal’s personality is different. Don’t rush things and closely monitor pet interactions to ensure both are safe and happy.

Generally speaking, cats can get along with nearly any pet, including bunnies. However, whether your cat will get along well with other animals and rabbits, in particular, largely depends on the cat’s unique personality traits and breed.

Each cat breed has a different personality, although it also depends on a specific cat’s genetics and environmental factors. For example, oriental cats are highly active and talkative, whereas British cats are a bit lazy and anxious.

So, which cat breeds get along the best with other animals? Defining the best cat breed to keep with other pets is challenging, but Birman, Abyssinian, Burmese, and Norwegian Forest Cats are among the friendliest and gentlest breeds.

Ragdoll, Maine Coon, Siberian, Japanese Bobtail, and Turkish Angora also tend to get along with other animals well. In contrast, Siamese, Oriental, Sphynx, Bengal, British, and Egyptian Mau can be lovely with owners but jealous and pretty ugly to other pets.

Stray and mixed-breed cats tend to be the most problematic to keep with other animals. Professional breeders strive to select cats with the best personality for their breeding program, but this isn’t the case with mixed-breed cats.

Of course, there are exceptions. A cat that has been raised in a house with rabbits, dogs, parrots, or other animals is more likely to tolerate a bunny than a cat that has never been exposed to other pets, regardless of the breed.

Even if a cat has never lived with other pets, but the owners have children, it’s more likely to be kind to rabbits. Cats living with children learn to be less jealous and more caring.

The Younger, The Better

Perhaps, the most critical factor that affects how a cat will perceive a rabbit is the cat’s age. Introducing an adult cat who never previously cohabited with other pets to a bunny is risky because the cat may perceive it as prey.

However, any cat can become friends with a rabbit if they grow up together. Kittens don’t yet have developed hunting instincts. If you introduce a rabbit to a kitten, they will grow up perceiving it as equal rather than as prey.

The younger the cat, the better. Ideally, the kitten should be no older than six months, but young, one-two-year-old cats also typically get accustomed to other pets in the house quickly. In contrast, a senior cat may never accept the bunny.

Note that this doesn’t work the other way around. Bringing a tiny bunny to an adult cat is simply dangerous, and an adult rabbit typically doesn’t pose a threat to a kitten. However, you shouldn’t leave the animals without supervision in any scenario.

Suppose you have a mixed-breed, old cat. Does this mean that you can never bring another animal into the house? Not necessarily. The most important rule in introducing a cat to a rabbit is making it slow.

Don’t expect a cat to accept the bunny if you let them freely roam the house (aka the cat’s territory) as soon as you bring them in.

Instead, take small steps, getting the animals acquainted gradually. Start by creating a stress-free environment for both pets.

Don’t introduce them right after you’ve bathed the cat, brought them from the vet, or after a long car trip. The cat and the rabbit should be relaxed and happy.

Ideally, keep the rabbit in a separate room for some time after bringing it home because seeing a cat will scare it. Make sure both pets are well-fed and rested before arranging the first meeting.

Playing with the cat is an excellent way to drain its energy and scale down its hunting instinct. When it’s time for the first meeting, keep the rabbit in a cage. The cage should be large enough for the bunny to hop around.

Don’t forget to put water, food, treats, and toys in the cage to reduce the rabbit’s stress. Place the cage in the same room as the cat and watch their reaction.

A few minutes are sufficient for the first time, but the meeting’s duration depends on the animal reaction. If both pets are calm, don’t rush to take away the cage – let them get accustomed to each other’s scent, look, and behavior.

Even if your cat and rabbit seem to get along right away, don’t leave them without supervision. Constantly monitor the interactions during the first week or two and keep them separately whenever you’re not home.

Try to pet the rabbit while the cat is watching to show it you care about the little creature. If the cat reacts emotionally to you touching the bunny, it’s likely jealous.

Note that a jealous cat may start biting or scratching the owner rather than try to harm the bunny. Dealing with jealousy in cats is straightforward. Spend more time with your cat, ensuring it feels loved, and give it enough personal space.

If the cat is aggressive and attacks the bunny or you, separate the animals and let the cat calm down alone. Don’t try to soothe the cat yourself and wait until the next day to bring in the bunny again.

Spotting aggression is simple, but how to know a cat has got used to a bunny? Wait until the pets can be close to each other without showing any abnormal behavior. If a cat smells the bunny and walks away calmly, you’ve achieved success.

Some pets never get real friends. Your cat and rabbit may never sleep or play together, but they should at least be able to ignore each other while in the same room.

Sometimes, reactions are unpredictable. If the cat is scared of a bunny or the bunny chases the cat, you should identify whether the pets are playing or the cat is actually scared. In the latter case, separate the pets, no matter how amusing it looks.

Pets often get anxious when something poses a threat to their food. Of course, your bunny and cat have different diets and won’t eat from the same bowl.

However, bunnies are curious. The rabbit will likely be interested in the cat’s bowl content. Don’t let the bunny get too close to the cat’s food bowl.

If you keep the pets too close while they eat, the cat may get territorial and jealous. Consequently, it may behave aggressively. Therefore, always feed your cat and bunny separately, even after they get accustomed to each other.

Private space is essential for pets. Your bunny and cat must always have their own territory where they can feel safe and rest. Get your cat a lovely warm bed and your rabbit a well-equipped cage or bunny condo.

Ideally, keep the pet homes in different rooms. In a studio apartment, you may place them in different corners, ensuring the pets can’t see each other while resting.

Private space is essential for two reasons. Firstly, it helps to keep jealousy at bay. Secondly, pets constantly exposed to each other may get overwhelmed. Both jealousy and sensory overload can lead to aggression and anxiety.

Be Aware of The Risks

Before bringing another pet to your home, you should be aware of the risks of keeping cats with rabbits. Cats are carnivorous animals, whereas rabbits are herbivorous, so the primary risk is apparent – the cat may attack the bunny.

However, it isn’t the only potential problem. Animals can transfer diseases to other animals. Some diseases are species-specific, so they can only transfer from one cat to another cat or from one rabbit to another rabbit.

For example, each animal species has a unique herpes virus. However, some viruses and bacteria can transfer between species and even spread to humans.

Therefore, whenever you bring a new pet into the house, you should first keep them in quarantine in a separate room for two weeks. Always wash your hands after touching the new animal or its food bowls and other items.

Another potential issue is behavioral changes. A new animal in the house may cause a cat to pee outside of the litter box, refrain from food, become aggressive towards the owner, or hide from everyone.

Both issues can be avoided by following the rules of introducing pets to each other and paying equal attention to both animals.